As the Karnataka hijab dispute gains momentum and is heard by the High Court, protests have spread across the country. Protesters staged several protests in multiple ways to demand that female Muslim students be allowed to wear the hijab in classrooms.

On Friday, the petitioners suffered a setback from the Supreme Court when it refused to hold an urgent hearing into the matter on Monday. India’s Chief Justice NV Ramana previously said the Karnataka High Court should hear the case first. The HC is due to hear the case next Monday. However, this does not prevent the demonstrators from registering their protest.

Here is what is happening in various states, besides Karnataka, on the hijab line:

A massive rally was held Thursday in Malegaon in Maharashtra, allegedly without permission, to protest the decision to ban hijab in government educational institutions. The protest was reportedly organized by Jamiat Ulema-e-Hind.

Protesters in Malegaon during the protest called by Jamiat Ulema-e-Hind on Thursday.

In Pune, members of the Hindu community started a counter-protest by dressing in saffron and chanting “Jai Shivaji”.

The legal professionals’ body All India Lawyers’ Association for Justice staged a protest in the nation’s capital on Thursday outside the Karnataka Bhawan in Delhi.

The leftist student organization All India Students’ Union also staged a protest outside the Karnataka Bhawan. Several activists of the organization were arrested by the Delhi police.

Several Muslim women took part in a protest in Shaheen Bagh on Thursday to support the wearing of hijab in educational institutions. On Wednesday, activists from the Aliah University Muslim Student Federation in Kolkata took part in a protest rally against the hijab controversy in Karnataka. 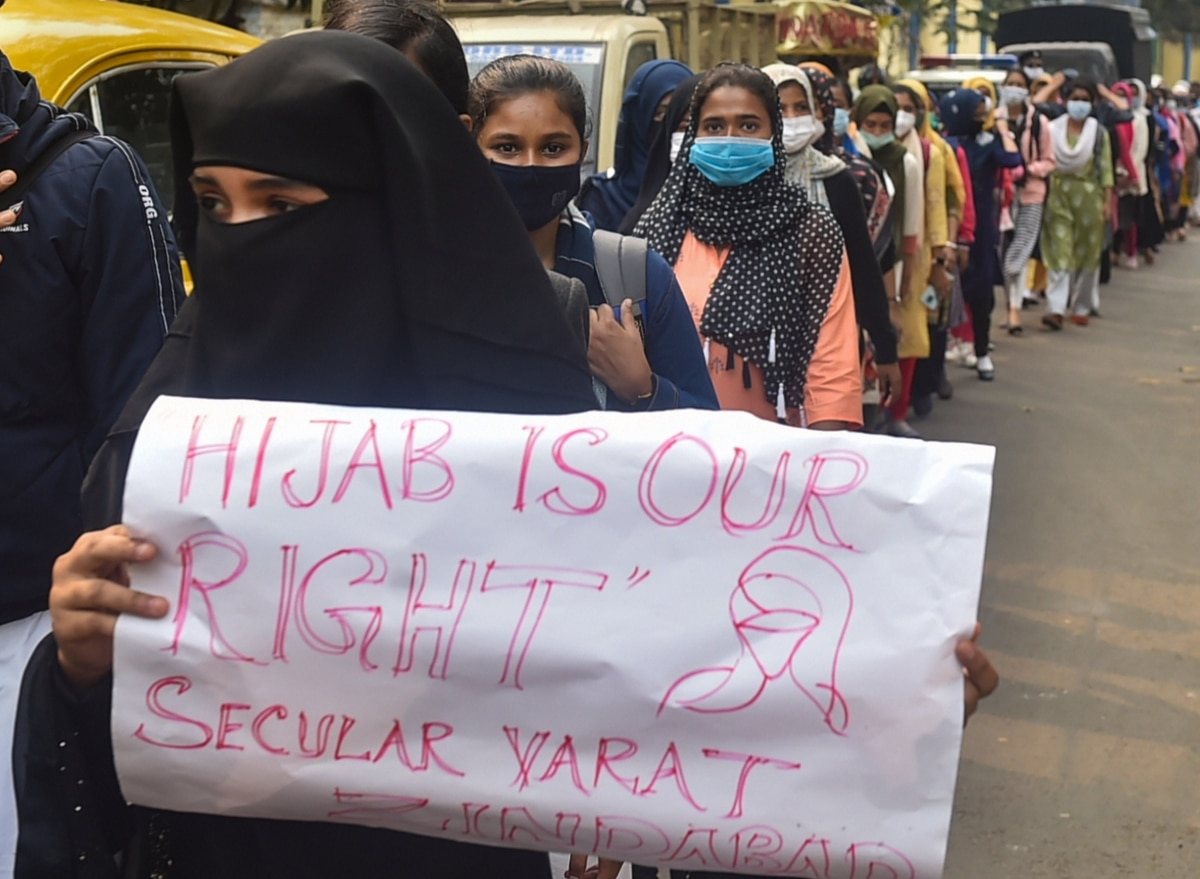 Students and minority organizations staged a protest against Karnataka’s hijab row in Visakhapatnam. They said hijab was their right as provided for in the Constitution of India. The demonstrators demanded “respect for the constitutional rights provided for in articles 14 and 25/1”.

Students of Charminar Unani College staged a protest against the hijab controversy in educational institutions in Karnataka.

Several activists gathered outside a public school and staged a protest against a Muslim student who was not allowed to wear the hijab inside the classroom in Pondicherry. Representatives of the Federation of Students of India, Thanthai Periyar Dravida Kazhagam, along with DMK civil servant Mohan, visited the school to inquire about the incident.

Female students at a private college in Bhopal protested by playing football and cricket in hijab.