After the Cornwall Senior Cup quarter-finals, the focus of the past week has returned to the league for many teams in Cornwall this Saturday.

The game was due to be played earlier in the month but cases of covid in the Argyle squad hampered the game causing the delay.

Falmouth come into the game having beaten Newquay 4-0 last weekend in the Senior Cup quarter-final.

Okehampton are on a four-game unbeaten streak winning their last game 2-1 against Ivybridge Town, giving Argyle a seven-point lead at the top of the league.

Elsewhere there is a battle of sixth against fourth in the Toolstation Western League as Helston Athletic welcome Bridgwater United. Helston have not played in a league game at home since a 1-0 win (which was the last time they took three points) against Shepton Mallet on 20 November.

Although the Blues exited the Senior Cup last weekend with a 2-1 loss to Western League rivals Saltash, they will be bolstered by the midweek signing of centre-back Jordan Bentley from Bodmin Town.

Wendron United will be looking to secure five straight league wins when they travel to St Dennis, the last. Adding to their excellent league form, Wendorn reached the Senior Cup semi-final last week with a 2-1 victory over Sticker.

The last time the teams met was in September when a brace from Charlie Young and a strike from Jack Stocker helped the hosts to a 3-2 victory.

Penryn Athletic return to Kernick Road for visiting 16th-placed Penzance. Athletic were beaten in the knockout stages last week against Bodmin and will be looking to avoid losing a third game in a row.

Three points for Penryn could move them to tenth depending on results elsewhere.

In the St Piran League, West Porthleven are on a journey as they head to sixth-placed Ludgvan.

Porthleven are currently 12th in the table and lost 4-1 to Truro City Reserves last week. No game for league leaders St Day allows Illogan RBL to close the seven-point gap at the top of the table when they host ninth-placed Helston Athletic Reserves.

Neither of the Combination League’s top two sides are playing this week, giving third-placed Mawnan a chance to catch up with the leaders when they take on lowly Lizard Argyle. 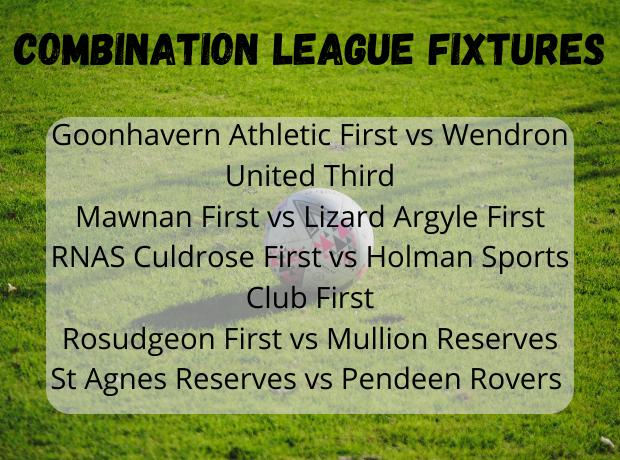